While Lightworks has only been available to the general public for a few short years, this award-winning editing suite has been servicing film industry professionals since the early 1990s. Being at the forefront of the digital film editing revolution, much of the terminology and techniques used throughout the application honor the tradition of hand-cut films. Lightworks was made with film industry veterans in mind; enhancing the inherently linear workflow with non-destructive tools. You’ll often hear video editing software referred to as “non-linear editors” (NLEs), which is just a fancy way of saying that video clips can be cut, trimmed, and spliced out of order while preserving the integrity of the source material. It’s a redundant term in regards to editing software, as all digital video editors are non-linear by nature. Because Lightworks is so steeped in film editing history, it’s interface and workflow can be overwhelming for the uninitiated. The Lightworks way of editing can be daunting even for those familiar with other modern NLEs, but I guarantee you’ll be a better, more efficient editor once you master it. In this introductory lesson, we’ll create our first project and take a high-level tour of the Lightworks toolset.

If you haven’t already done so, visit www.lwks.com to download and install Lightworks. Open up the application and inhale deeply as you gaze into the calming, blue interface. Now exhale. Ahhh, that’s nice. Because Lightworks was initially distributed as a turnkey solution for production studios, the interface dominates your entire screen, obscuring the underlying operating system. If you’d like it to look and act more like a native application, click on “System Settings” in the bottom left corner and set “Fullscreen window” to “No”.

From the System Settings menu, you may also customize various aspects of the user interface. I prefer a neutrally colored work environment, so I’ve modified my window colors to be a dark gray instead of the standard blue.

Before we can get started, Lightworks needs to know the name and frame rate of your project. Frame rate is also referred to as frames per second, or fps for short. It’s very important that you know the frame rate of your video because Lightworks won’t let you mix frame rates. The frame rate is the speed at which a video displays unique, consecutive images called frames. Think of videos as a series of still images played back to back really fast so that it looks like the picture is moving, much like a flip book! I won’t bore you with the history and differences of frame rates right now, but I will say that most home videos are probably 30 or 60 fps, and you’d only see 24 fps if you were making a film. If you have no idea what frame rate your video is, you can choose “auto”, or open up one of your source clips in VLC and click on Tools->Codec Information. This will likely tell you that your video is some crazy frame rate like 29.970030. 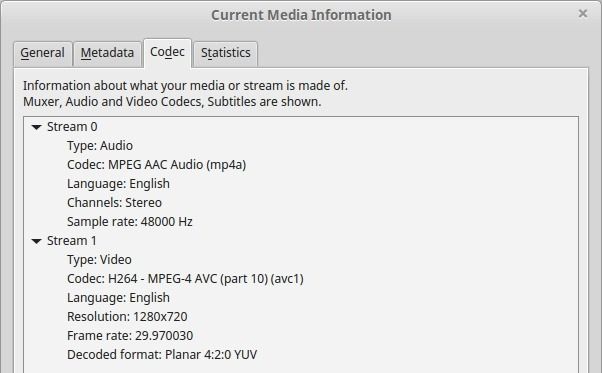 Don’t freak out! There’s nothing wrong with your video, but explaining this unusual frame rate is beyond the scope of this tutorial. For now, just round up and choose the corresponding frame rate in Lightworks. Enter a name for your project, then click the “Create” button.

Lets first take a look at our project settings by clicking on the name of the project in the top left corner of the application. 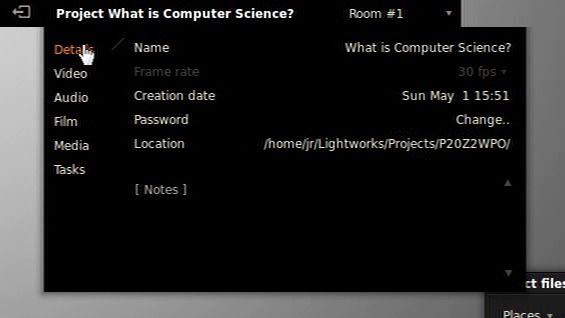 Here we see a few basic details about our project, including the location where all of our assets and project files are stored. While you should never manually modify any of the Lightworks project files, it is useful to know that all of your projects, edits, and media are organized in folders found within the “Lightworks” folder under your home directory. The project destination folder can only be modified with a Lightworks Pro license.

Hop on down to the video tab and make sure the output format matches your source material. Our project will be 720p 29.97fps. 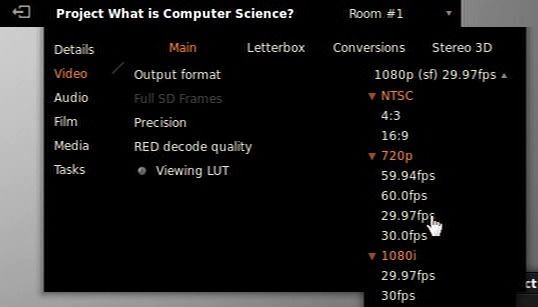 It’s unlikely that you will need to edit any other project settings, but there are a few noteworthy sections we should take a peek at while we’re here. The media tab lists your available storage devices and where your media is located. You can use this menu to move your assets to an external drive to conserve disk space. Keep in mind that this will only move your imported assets. Your project files will still reside in the default projects folder. 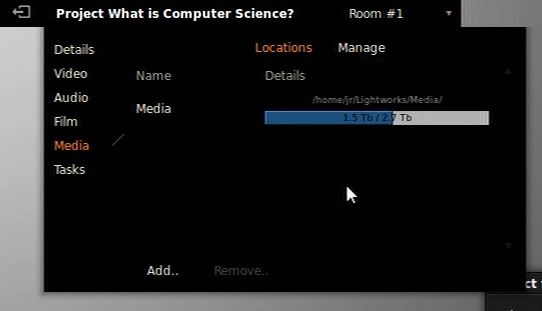 The bottom-most tab, “Tasks”, is used for monitoring and killing background processes such as importing, exporting, and rendering effects. Directly to the right of your project title in the top left corner is a drop down menu for “rooms”. You might use rooms as “scenes” of a movie or “episodes” of a series, or maybe you prefer a certain layouts when mixing audio, color correcting, or editing. You could set up a room for each of these cases. Each room will save the position of any open windows and tools.

The tool bar, found along the left hand side of the Lightworks editor, contains several carry-overs from ye olde tape-based editing days. As such, only a few of them are relevant in a digital world, but we’ll run down each one from top to bottom so you know what they do.

We can’t do much else without some videos to work with, so grab the course materials at gumroad.com/l/lwks and I’ll see you in the next lesson!